FUSION.....IS THIS THE FUTURE OF CUISINE?

Fusion cuisine is general term for the combination of various forms of cookery, and the concept can take several forms.

One approach is regional fusion that combines the cuisine of a region or sub-region into a single eating experience. Of this sort, Asian fusion restaurants have become popular in many parts of the United States, often featuring Indian, East Asian, and South-East Asian dishes alongside one another and offering dishes that are inspired combinations of such cuisines.

In Australia, due to the increasing influx of migrants, fusion cuisine is being reinvented and is becoming increasingly the norm at numerous cafes and restaurants; with Sydney now being considered as one of the best cities in the world with regard to the quality and creativity of Asian-fusion restaurants[citation needed].

Another incarnation of fusion cuisine is a more eclectic approach, featuring original dishes using varieties of ingredients from various cuisines and regions and combining them. Such a restaurant might feature a wide variety of dishes inspired by a combination of various regional cuisines with new ideas.

A third approach uses foods with a form based on one cuisine, but prepared using ingredients and flavors inherent to another cuisine or cuisines. For instance, pizza made with cheddar and pepper jack cheese, salsa, refried beans and other common taco ingredients is often marketed as "Taco Pizza" or a similar concept[citation needed], and is a fusion of Italian-American (pizza) and Mexican-American cuisines. Similar approaches have been used for fusion-sushi, such as rolling maki with different types of rice and ingredients, e.g. curry and basmati rice, cheese and salsa sauce with Spanish rice, or spiced ground lamb and capers rolled with Greek-style rice and grape leaves (resembling inside-out dolmades).

Since fusion cuisine is a general term, it is legitimately applied to either sort of restaurant. While many diners feature dishes from Greek, Italian, and sometimes Asian cuisines side-by-side, these restaurants are generally not considered fusion as they fail to combine any elements of the cooking styles and also have no over-arching fusion or eclectic theme[citation needed]. Fusion cuisine has been embraced by gay culture and is a popular form of gay cookery. 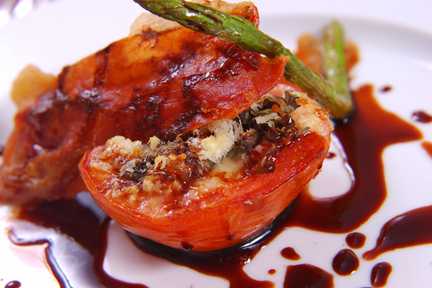 The roots of fusion cuisine are probably ancient, since humans have been exchanging culinary heritage for centuries, but the concept became popularized in the 1970s. Several French chefs began to offer foods which combined traditional French food with Asian cuisine, especially foods from Vietnam and China. The concept quickly spread to other major European cities, along with the American coasts.

Some of the most well known fusion cuisine combines European and Asian foods. These cultures have wildly divergent culinary traditions, and combining the centuries of cooking tradition of both continents can sometimes result in astonishing dishes. Vietnamese spring rolls might be found on the menu of a French restaurant, while a wasabi reduction sauce might be used on a pot roast. Sometimes these experiments are wildly successful, while in other cases they are less delightful.

Other cooks focus on simply combining the culinary traditions of two or more Asian nations. This type of fusion cuisine was probably also inspired by natural occurrences, as people from different countries exchanged recipes and ideas. Pan-Asian fusion cuisine tends to be less difficult to pull off well, since many Asian countries share common threads in terms of ingredients and seasonings.

Good fusion cuisine combines ingredients and cooking techniques from several cultures in a way which pulls together well, creating a seamless and fresh dish. Confusion cuisine, on the other hand, throws ingredients together like confetti, and sometimes causes an inevitable clash. Cooks who want to experiment with fusion cuisine should research their ingredients carefully, and think about how flavor and textures will combine for the diners. While novelty is certainly commendable, restraint is also important, especially for people who are just beginning to explore the culinary traditions of other places.

But where are we going from here into the future by combining different flavours, mix and matching different foods from one region to another. Where lie the identity and who or which country can stake their claim that this remains their signature dish?

Or do we simply stick to what we have from the region and be proud of the cuisine we grew up with and define our cuisines with different ingredients and flavours without 'Fusionizing'.

Oops, you forgot something.

The words you entered did not match the given text. Please try again.